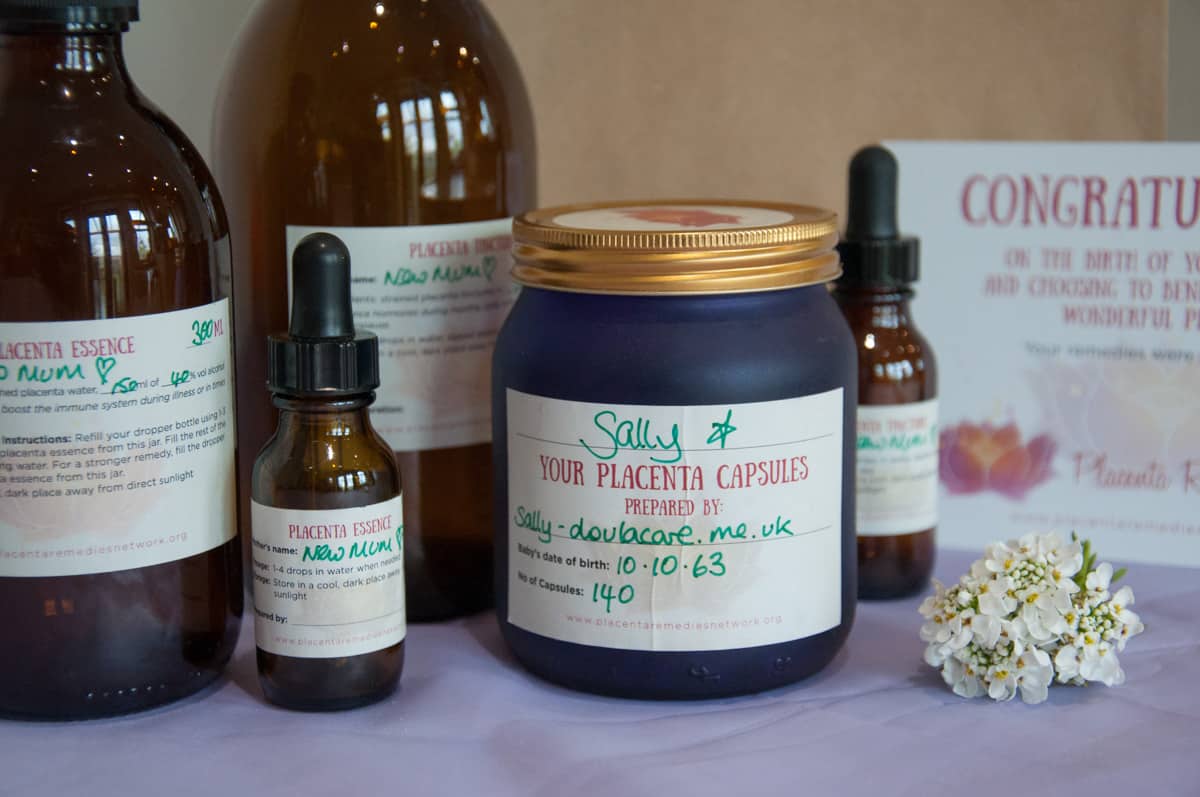 What have you learnt about placenta remedies?

“One thing I’ve learnt is that the placenta is a lot more potent than I ever imagined it could be. In fact, it surprised me just how potent it was. I had one mum phone me up, she was one of my doula clients as well, l’d been at the birth of her son and it was about three months later when she called. She was still breastfeeding and she had stopped taking her placenta tablets every day.

At first, she had been taking them three times a day and it carried on like that for ages. Then that had petered off until she was taking just one a day. Finally, she had started to take them on an ad hoc basis when she came down with a cold and was feeling pretty grotty. She woke up the next morning feeling poorly and decided to reach for her placenta capsules and take a couple. The next thing she knew, within an hour her breasts were so full of milk her son couldn’t believe it and was covered in milk! By taking the two tablets she had gained an abundance of breast milk and it was directly attributable to the placenta capsules.

She was so excited that she had phoned me up to tell me, and said, “you’re never going to believe what’s just happened!” And, of course I did believe what had happened. For her, it had boosted her breast milk and had come from nowhere. She was run down and so her breastmilk was more likely to be dwindling than overflowing. It’s such a great story and it’s one of many.

It’s also wonderful finding out how the partners notice the difference. I’ve heard countless stories of partners asking, “haven’t you taken your placenta capsules”, because they can tell when their partners haven’t. The new Mum might say, “I’m feeling really stressed today”, and their partner replies, “have you taken your placenta capsules?”, “no I haven’t”, “well there you go”.

Mums also notice and ask themselves, I haven’t taken my pills today, right ok, that might be why I’m feeling a bit low or why I’m lacking in energy. I’ve had people referring to them as, miracle pills, happy pills and boosting pills to mention a few.

Setting up the Placenta Remedies Network

I set up the Placenta Remedies Network (PRN) as a way for Specialists to learn and grow together, supporting each other as the industry evolved over time. Sharing best practice in an unregulated field over the years has meant that regulatory authorities such as Environmental Health now recognise the services our members offer and can manage them appropriately. This ensures clients, PRN members and the public are kept safe.

From the very beginning PRN was set up as a not for profit organisation with a committee that dissolves each year and a new committee voted in by its members. That doesn’t mean it’s necessarily a different committee but it ensures that the members are always involved in the decision-making process. It also ensures there are no conflicts of interest as the organisation is impartial.

I launched the Network in January 2016 and now there are about 100 members, with a handful outside the UK and Ireland. We used to have Australian members but they set up their own highly successful network, which was the right thing for them to do.

We have noticed a slight decline in interest recently of placenta remedies and I think in part that is because they’ve been linked to celebrities, which has turned the remedies for some into a bit of a fad. Celebrity endorsements have given placenta remedies great exposure but there has also been a backlash from it, with people turning away from the remedies a little and not taking them seriously. We know the benefits as do the people that have it done, so hopefully the numbers will start to go up again and in the meantime the total number of placenta remedies being made across the Network are still very healthy.

In the eleven years that I was preparing placenta remedies I made over 1,000 remedies and helped bring 93 babies into the world as a Doula. I also trained over 100 people to make placenta remedies from a workshop I’d run almost every month, each with at least 6 attendees. So, there are all of those people who already know about the benefits and can help keep up the momentum.

Making the decision to retire

It seems to me a perfect time to drop into the background, I’ve moved house and I need to make time for personal plans. It’s a good time as well because I know there is now a fantastic network in Brighton and across Sussex of Placenta Remedies Specialists, whereas before I was on my own! In the past there were times when I was excruciatingly busy because it was just me and it wouldn’t have felt right to have left then. It’s comforting to know that women in and around Sussex will be well supported.

In terms of the Placenta Remedies Network, a little bit of me thinks the committee needs to spread its wings a little further and that if I don’t sit on it any more, that might encourage new ideas and stop people thinking what will Sally make of this. There are already some fantastic ideas out there, such as working closer with the authorities, with each other and with the best will in the world I might be stifling ideas as well as generating them!

Read Part III to find out about the future of the Placenta Remedies Network.

With thanks to Sally for sharing her placenta remedies story. Sally is DoulaCare at www.doulacare.me.uk, and has just retired from her roles as Doula, Placenta Remedies Specialist, Champion Breastfeeding Peer Supporter and Founder of Placenta Remedies Network. Sally is available for consultancy work and as a guest speaker on the future of placenta remedies, breastfeeding and doula work.