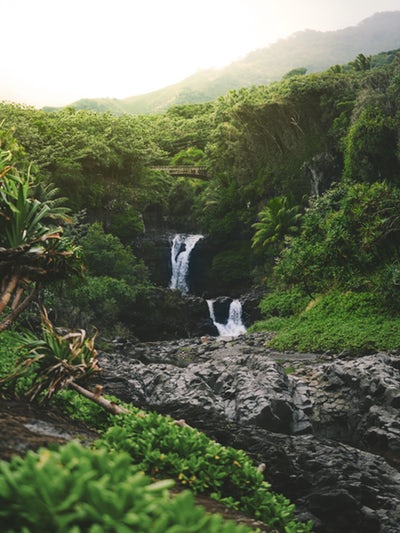 This week the fabulous Hannah shares her birth story of her second child, who was born at home in Hawaii with the support of a local midwife.

“By the time we had decided to move to Hawaii I had already given birth to my son. At that time although I had thought a lot about it I had not ended up using my placenta when my son was born. I hadn’t been ready to do that but then later I wished I had. So when my daughter was born I was really determined to use the placenta this time.

Partly, I was in awe of the fact that our bodies make a whole new organ when you’re pregnant to support the baby. And in nature, a lot of animals eat their placenta to give them back nourishment once they’ve given birth.

When my daughter was born, I decided I was definitely going to eat it and also to put some in brandy to make a homeopathic remedy.

The night she was born I went into labour about 3 am and that’s when we called the midwife. I remember she arrived about one hour later, at four in the morning. At this point I was nearly ready to give birth and I was having really intense contractions and soon after gave birth to my daughter. At the same time my son woke up and came into the room, which was really amazing because he was present. He now goes, Oh Mum it was the worst night of my life, but he doesn’t mean it, he’s fifteen so he’s a bit embarrassed by it all!

When I gave birth to my daughter I was kneeling on the floor and I didn’t want to cut the cord for a little while, it felt right to wait a while (there are lots of schools of thought on that). So, I got into bed with her and just let her suckle a bit and have her on my chest. My partner and my son were there, in bed with her too. Then the midwife said it was time to cut the cord because it had kind of stopped pulsing and by this point the placenta was about to come out. So we cut the cord and I gave birth to the placenta and it came out quite simply and wasn’t painful (I was quite lucky). When it was out the midwife asked me what I wanted to do with it. My first instinct was I just wanted to eat it, right there and then. It sounded bizarre. But the midwife took it away first and checked it and when she brought it back she said it was one of the healthiest placentas she had ever seen and she’d been a midwife for 25 years.

She brought it in for me to look at and asked me what bits I wanted her to cut for me. The midwife cut some really thin slices, a bit like sashimi! I didn’t want to smell it cooking. The thought of smelling it cooking made me feel quite sick, that was my perspective on it at the time. I know some people do and it’s probably fine, but to me, I didn’t feel right about that. But I had also been a raw foodist for quite a while and it didn’t feel that different to that. I had a tiny little piece and it felt so nourishing to have it. After you’ve had a baby you’re a bit full of hormones and I think because I was happy and so full of hormones I was like, OMG this is so good! Everyone, you should have some. At this point I was with my midwife, my partner, my son and my dear dear friend who had come over. My midwife said she’d never actually eaten any before, so actually had a tiny bit. We all actually had a tiny bit of placenta. They were probably thinking, just say yes to placate the madwoman!

It was a bit like having lightly cooked venison. The first time I ever ate venison I was at Jo Jo’s restaurant in Whitstable, which is a really gorgeous restaurant and I cried because the venison was so good. I was pregnant with my daughter at the time. And weirdly that’s what my placenta tasted like to me.

That was the first bit of placenta we used. Then we put the rest in a sterile bag and for the first couple days after my daughter was born I was having a small slice of it every day.

Instinctively this felt ok for me. Physically, I felt really amazing, I’d had no drugs or meds throughout the whole pregnancy. Compared to after having my son I felt my strength come back quite quickly and I did attribute that to eating the placenta. I looked at the placenta, it’s such a beautiful organ, so amazing what our bodies do. I chose a heart shaped bit of it to put in brandy. I bought a high-quality brandy to make the tincture out of and then put it in a dark glass bottle, added the brandy and sealed it. I also did that with the cord. I still have the cord in brandy, in my cupboard.

There’s a complicated thing about homeopathy, I shook the brandy heart every day keeping the liquid active. After about six weeks I sieved it out into muslin and what I was left with became the mother tincture. I diluted it and I kept that to use for just my daughter and me when we’re not well. It feels like it hers and mine and noone else’s.

I looked into turning the rest into powder but didn’t in the end. The rest of the placenta we took to an incredible waterfall, the Ho’opichi Falls in Hawaii and buried it under a tree. It was a very special place to us and it’s where I had gone when I had been pregnant almost every day for a swim. It was about six weeks later that we took it from the freezer and found a place to put it into the ground to nourish the trees. I later found out it was where they had filmed the opening of Jurassic Park. 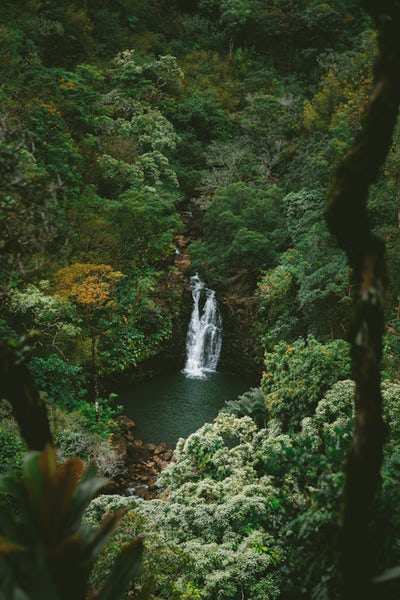 I came back to England a year and a half after that and have been back in England ever since. It now feels as if that all happened in a dream world. I was so blessed to have the homebirth I did. Kauai Island had an amazing team of midwives, so I was lucky to have had their support.

I actually had an orgasmic birth, the pain turned to pleasure and it was a deeply profound experience, but perhaps I’ll talk about that at another time!”

Thanks so much to Hannah for sharing her truly wonderful story with Placenta Remedies Network.