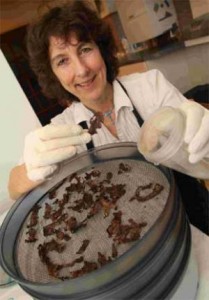 From an article in the Bournemouth Echo

A POOLE independent midwife has branched out into “harvesting” afterbirths to turninto health-boosting capsules for new mothers.

Placenta specialist Caroline Baddiley says demand for her service has shot up since the concept was shown on comedian Sharon Horgan’s recent Channel 4 programme How to be a Good Mother.

Although most mammals eat their afterbirths, TV chef Hugh Fearnley-Whittingstall caused widespread revulsion 14 years ago when he fried a placenta with shallots and garlic for a Channel 4 programme and turned it into pate for a party to celebrate the baby’s arrival.

More recently, eyebrows were raised when Tom Cruise announced that he intended to eat the placenta after his and Katie Holmes’ daughter Suri was born.

The idea of drying and encapsulating placentas for the more squeamish was imported from the USA by Lynnea Shrief of the Placenta Encapsulation Network. “She has been training people to be placenta specialists for two to three years so they can offer the service locally to newly-delivered mums.

“I’ve had a steady trickle of inquiries, but they really shot up after that programme,” said Caroline. “There’s some research to say that there are benefits for the mother. “It’s a rich source of hormones and various chemicals, and it’s thought that by dehydrating and preserving it, some of those factors can go back to the mother. “It looks a bit like liver, but because it’s in pill form, it’s far more palatable. The capsules look like a herbal remedy. It takes away the yuck effect for some people.”

Among the benefits claimed for placenta are that it increases breast milk production, boosts iron, increases energy and helps stave off post-natal depression.

Some women save some of their capsules for the menopause, as the placenta is said to be a rich source of natural hormones.

Once a mother-to-be has decided to use Caroline’s service, the midwife has to be on standby to collect the freshly-delivered afterbirth in a coolbag and take it home, where it is dried before being turned into a powder under strict hygiene conditions. “A large one will make 90-120 capsules. We recommend three to four a day for four to six weeks. After six weeks, you can have them as you need them,” said Caroline.

“I have seen women who have previously suffered from post-natal depression feeling wonderful. Other women say their milk supply has gone through the roof. Women who have had a baby can feel very tired and it seems to boost their energy levels.”